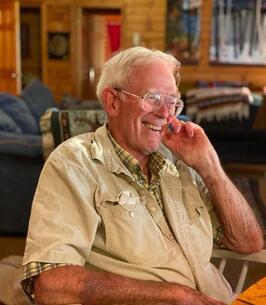 VIENNA, MAINE
Daniel K. Onion, a family doctor who dedicated his career to improving rural health care and who became a vital community leader in central Maine, died Tuesday morning at his home in Vienna, Maine. He was surrounded by his family whom he fiercely loved, guided and supported. He was 79.
Dan was born in 1942 to Margaret and Bill Onion and grew up in Rutland County, Vermont. He was their first child and became a big brother to siblings Carlie and Matt Onion. As a youth, he spent his days exploring woods and streams, hiking, fishing and trapping. At Rutland High School he met his future wife, Pat Arnold. They were voted king and queen of their senior prom. After graduating as class president from Rutland High School, Dan attended Harvard University and Harvard Medical School. Pat and Dan married in 1965 as Dan was completing his medical degree and Pat was working toward her doctorate in English at Harvard. Their first child, Fritz, was born in 1968, followed by Amanda in 1970 and Alene in 1980.
From the start of his medical career, Dan embraced the role of a country doctor. During a sabbatical in Juneau, Alaska, he not only cared for the local human population, but also occasionally local animals, including a seal that was hoisted onto his examining table. After completing his residencies, Dan and Pat moved to Farmington, Maine in 1972.
Recognizing cardiac health as a priority, particularly among low-income families in Franklin County, Maine, Dan and colleagues founded the nonprofit Rural Health Associates in 1974. The program initiated and coordinated health screenings throughout the county. The screenings were followed up with dietary and fitness counseling and tailored health care between patients and local physicians. A 2015 study published in JAMA by Dan and his colleagues, showed that, over the course of 40 years, the county saw a significant reduction in death and hospitalization rates, compared with the rest of the country-including wealthier regions.
In 1982, Dan shifted his focus to teaching new doctors when he joined the faculty of the Maine-Dartmouth Family Medical Residency. He served as director from 1985-2002, during which time he helped found the residency’s geriatric fellowship and also launched a series of reference books designed to help doctors in training. The Little Black Book series was based on the black binders in which he kept notes, and that he often wore clipped to his belt as he made his rounds.
In the Mount Vernon-Vienna region, where Dan and his family moved to in 1984, Dan was an executive board member of the Parker Pond Association, a co-founder of the 30 Mile River Watershed Association, and Health Officer for two towns. From 2010-2019, he served as a board member for the nonprofit, Portland, Maine-based health care organization, Martin’s Point.
In 2015, after identifying a need among his elderly patients in rural central Maine, Dan co-founded Neighbors Driving Neighbors. NDN connects volunteer drivers with adults needing transportation to medical appointments, shopping and other essential errands. At the time of his death, he was working to start up an Aging in Place program serving Fayette, Mount Vernon and Vienna that he hoped could be a model for how rural seniors could stay in their homes through the aging process.
During the COVID-19 pandemic, Dan provided weekly zoom meetings to update the community on the latest medical findings and guidance. He also published a monthly health column in the local newsletter and provided consulting to area schools and organizations as they navigated back to in-person status.
Throughout his life, Dan was passionate about cultivating the land where he lived. He created a small farm at his family’s home in Farmington. He used antique haying equipment he found on the old farm to hay the fields to feed his oxen, cows and sheep. He trained his ox team, Cyrus and Roscoe, to pull the haying equipment and once, even to pull his father-in-law’s car out of a ditch. He tapped maple trees at the Farmington and then the Vienna home, and boiled the sap, sharing the spring syrup harvest with family, friends and neighbors. He kept bees, planted a vegetable garden and pressed cider from apple trees that he’d planted behind his home in Vienna.
Dan was able to spend his final day at home gazing at those apple trees, thanks to the incredible staff of MaineGeneral. As his hospice nurse remarked, Dan was “a doctor to the end,” diagnosing himself and telling his family what he needed. His granddaughter, Zoë Onion, monitored his vitals throughout the night, using the stethoscope that Dan had passed on to her as she began her training to become a family doctor. He died on July 6, 2022, in the early morning-his favorite time of day-as a light rain fell, with his family, including Pat, his wife of 57 years, by his side.
Dan is survived by his wife Pat, children, Fritz Onion, Amanda Onion, Alene Onion, their partners Susan Onion, Subrata De and Alan Chen and his grandchildren, Zoë Onion, Sam Onion, Ellora Onion-De, Lyra ChenOnion and Otto Daniel ChenOnion.
A service celebrating Dan Onion’s life will be held on Friday, July 29 at 2 p.m. at the Mount Vernon Community Center, 2 North Road, Mount Vernon, Maine. In lieu of flowers please consider contributing to groups that Dan helped found, including 30 Mile River Watershed Association and Neighbors Driving Neighbors, or contribute to groups in your own community. You may also plant a tree in Dan's memory by clicking this link.