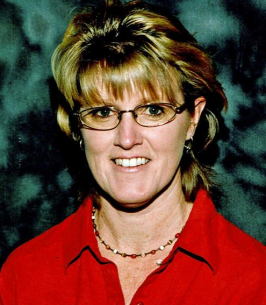 BELGRADE. MAINE
Hilda R. Duplessis, age 57, died Monday, June 13, 2022, following a brief illness. She was born in West Warwick, RI on August 5, 1964, a daughter of Gordon J. and Priscilla H. (Murdock) Pepper.
Hilda was a 1982 graduate of Messalonskee High School.
She has been employed by Hannaford Supermarket for 39 years, working in several departments. Hilda worked in the bakery and was incredibly talented at making beautiful wedding, birthday and anniversary cakes for those near and dear to her.
Hilda was an avid sports-woman and enjoyed many hunting trips with her husband and father. She loved the outdoors and working in her garden or tending to her chickens. Most of all, she loved her two grandchildren, Cole and Avery, with all her heart. A huge part of her free time was spent with them, going on trips, spending time at her house for sleepovers with her and Grampa and going on fabulous ocean trips with sand in their hair and sunburns on their cheeks.
Hilda was a beautiful wife, mother, grandmother, sister, aunt and friend. She always put everyone else’s needs before her own and wasn’t one to complain. Anyone who had the opportunity to know her, will remember her humor, kindness and warmth and she will be greatly missed.
Hilda was pre-deceased by a sister, Cynthia Pepper-Morin.
She is survived by her husband of 39 years, Richard W. “Dicky” Duplessis of Belgrade; her daughter, Coral Castonguay and her husband Erik, of Livermore Falls; two grandchildren: Cole and Avery Castonguay; three brothers: William “Billy” Pepper of Fayette, David Pepper and Leslie Pepper, both of Belgrade; two sisters: Elizabeth Pepper and Amy Faucher, both of Belgrade as well as numerous in-laws, nieces, nephews and cousins.
Relatives and friends may visit on Sunday, June 26th from 2-4 PM at Plummer Funeral Home, 16 Pleasant St., Augusta where a memorial service will take place on Monday, June 27th at 11 AM. Burial will be at a later date in Pepper Family Cemetery, Belgrade.