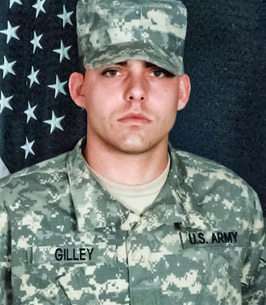 VASSALBORO, MAINE
SPC. Jeremy L. Gilley, age 37, died unexpectedly Monday, May 30, 2022, at his home. He was born in Waterville, ME on December 22, 1984, son of Thomas V. and Tammy A. (Green) Gilley.
Jeremy grew up in Palermo and attended Erskine Academy. He served in the US Army in Delta Company, 1st Battalion, 502D Infantry Regiment during Operation Enduring Freedom. Jeremy encountered many obstacles during his life but always had the strength and determination to overcome them. After he lost both of his legs in his 2011 accident, limiting him from the things he enjoyed doing, Jeremy had his daughter Kara. She became his whole world and motivated him to set and achieve goals. His most recent goal was converting his truck into a camper. He planned to travel the US, reuniting with some of his former military brothers along the way.
He was pre-deceased by his father, Thomas V. Gilley, uncle, Lonnie Gilley and maternal grandmother, Diane Green.
Jeremy is survived by his mother, Tammy A. (Green) Gilley of Palermo; his daughter, Kara Gilley of Chelsea; two sisters: Jessica (Gilley) Toothaker of Augusta and Taylor Gilley of South China; nephew, Aaric Toothaker and niece, Cadence Welch; paternal grandmother, Dorothy Gilley; maternal grandfather, John Green as well as several aunts, uncles and cousins.
A graveside service will be held on Wednesday, June 22nd at 10 AM at the new Maine Veterans Memorial Cemetery, Mt. Vernon Rd., Augusta. A gathering for family and friends to follow will be held at VFW, 509 Leighton Rd. Augusta, ME
Donations in Jeremy’s memory to: Veterans No Boundaries, 8 Sundance Ln., Newry, ME, 04261 or online.